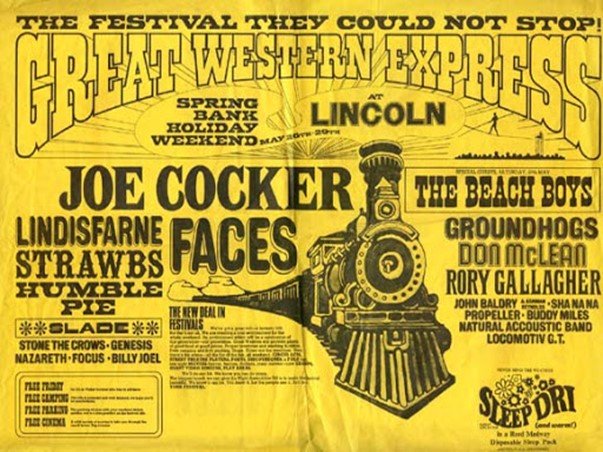 Zulus, Vikings and Rock Gods meet in the Lincolnshire countryside

What has the Welsh actor Stanley Baker (of Zulu and The Guns of Navarone fame) got to do with a music festival held in the Lincolnshire countryside?  While walking the Viking Way, I realised I was walking in the footsteps of Joe Cocker, Stanley Baker and more when I made a detour to Tupholme Abbey.  The Abbey is about a quarter of a mile off the path and was once a thriving abbey before Henry VIII’s dissolution of the monasteries.

There I discovered was that in May 1972 Tupholme was the centre of a major music festival – The Great Western Express. The festival was organised and funded by Stanley Baker and Lord Harlech. It attracted 50,000 people eager to see some of the biggest names in pop music.

The fight to save The Great Western Express Festival

The local council, landowners and village residents raised staunch opposition. This despite a successful folk event the year before featuring The Byrds and James Taylor. Stanley Baker and Lord Harlech fought an application in the High Court to prevent the festival from taking place. The Bishop of Lincoln, the Right Reverend Kenneth Riches, offered his support.  He wrote to the court to express how impressed he was with the folk festival the previous year.  He also declared he intended to conduct a special service at the Great Western Express Festival.

The night before the festival began, gale force winds battered the site, smashed up the stage and wrecked tents. Organisers worked through the night to ensure the show would go on. However torrential rain and hazardous wind conditions forced festival goers to seek shelter by any means they could. By the time the music started, several hundred fans had been treated for exposure. Despite all this festival fans cheered Stanley Baker when he followed Slade on to the stage and thanked them for staying the course.

Sadly  it was not a financial success for the event organisers,. The festival cost a reported £180,000 to stage with only £150,000 taken on the gates. This proved to be Stanley Baker’s last foray into funding music festivals. Sadly, the 1972 event was the last at Tupholme. Today Tupholme Abbey is a beautiful, peaceful spot. It’s hard to believe it hosted such a stellar line-up of performers and over 50,000 festival goers.

How to Travel Light, Travel Fast